For a few years now I have been running Ubuntu 14.0.0 on an old Toshiba Satellite A100 laptop (from the Microsoft Windows XP era).  It was sort of as an experiment but it was also because I like to keep the old stuff operational for as long as possible.  Linux operating systems are less resource hungry compared to the offerings from Microsoft and so the good old Toshiba did everything you would expect from a much newer computer.

There were a few issues though.  It would run quite hot for one.  I don’t know if the hardware did not like to be pushed too hard with playing full screen videos, or that there was a problem with the thermal management, lack of Ubuntu drivers, or all three issues.

The lack of integration with Microsoft products also made using a Linux based operating system a little awkward.

For a little while the laptop had developed a fault where the screen would flicker or briefly disappear and then the cursor could be moved but clicking did nothing.  Also, it would sometimes not wake up after going into standby.  It seemed to be a fault that was related to movement of the motherboard. I had stripped it down after it started happening but there was no obvious cause.  As is often the case for these faults it stopped playing up for a while after being checked.

The intermittent fault was getting a little worse but then one evening, quite suddenly, the laptop stopped charging. Oh, and I forgot to mention that the battery was pretty well stuffed and the charger had to be plugged in virtually all the time.  I did all the usual things a technician does.  I checked the charger.  No problems there.  So I stripped down the laptop and started doing some fault tracing.  The two fuses were ok, the low ohm resistors were ok, the coils were ok but one looked like it had been running hot.

And then I noticed this: 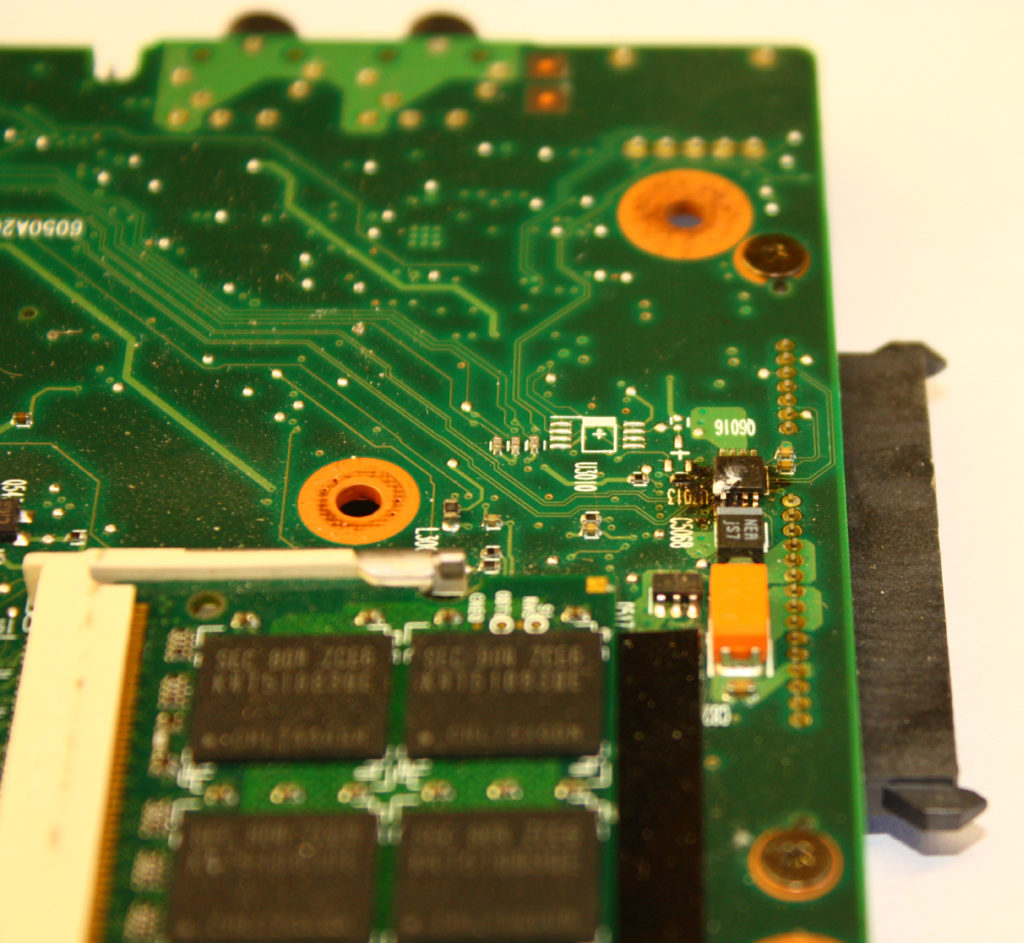 Looks like the magic smoke escaped from the chip.

Looks like the chip is toast and pretty much so is the whole laptop.  The chip is close to the hard drive connector but the hard drive was still working.  Interesting.  It does not matter if the hard drive is stuffed because everything that is important is on the cloud.

Time to dig another laptop out of the recycling pile.  I found a Toshiba Satellite M300 that looks like it only needed an LCD cable.  Cheap enough on Aliexpress so I ordered one.  Another laptop that was kicking around was a HP G60 that had been running Windows 7.  It had a stuffed hard drive.

Now I know from past experience that you cannot pull a hard drive out of one machine and just bung it into another one and expect it to work.  There are all sorts of driver issues.  To possibly make things easy and as an experiment I thought I might try to drop the hard drive out of the Toshiba straight into the HP.  And guess what! It worked! I am typing this blog post minutes after the transplant!  The only thing I had to do differently is to enter the wireless password. I have struck this before.  It seems that the wireless password is stored in hardware somewhere rather than on the hard drive.

So is this all an indication of how good the generic Linux drivers are?  It is not really a security issue since I still had to enter my login password.  So is this the way of the future where we pull the solid state hard drive out of a stuffed old machine and bung it in a new one?  Sounds like a good idea to me.

2 Responses to Ubuntu and laptops