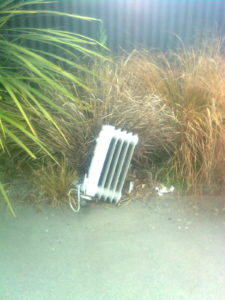 A discarded oil heater on Madras St in Christchurch.

Here in Christchurch  I often see televisions and other appliances dumped by the side of the road.  Sometimes they are carefully placed outside a private residences.  They are also put next to the clothing recycling bins operated by charities.  I will write more about the televisions at a later date but I often see those cheap column oil heaters as a discarded item. Well ok, I have twice seen them on the roadside in the last six months!

I have looked at a few of these heaters and the common fault is the castors falling apart.  Also the support plates for the castors are made of such thin metal that and of a poor design that they bend really easily.

Replacing the castors is a really easy job.  They can simply be unbolted and replaced with new ones.  So why are the owners not fixing them or getting someone handy with a spanner to do it?  Surely that is a much easier option than discarding the faulty heater, earning  money to buy a new one, finding your way a shop that sells them, taking it home, and then unwrapping and assembling it?

And I thought we were scrimping and saving because of this so-called economic recession.