Microwave ovens are an appliance commonly used in households and food outlets.  They are able to be readily repaired or recycled and require very little in terms of maintenance.

Care
A microwave oven can remain in service for decades, especially if it is kept clean.  To prevent rusting and degradation of the mica waveguide cover the interior of the oven should be cleaned regularly, especially the corners and edges of the metal walls.  Leave the door ajar after cooking especially if there is large amounts of condensation in the oven.

If the oven has a mica waveguide cover instead of the less common plastic type it may require replacement at some point.  Mica is a mineral that is resistant to high temperatures but the waveguide covers absorb food material and the cover will eventually carbonise and cause sparking.  When this happens it should be immediately replaced.  It should also be replaced if it no longer seals the opening which it covers. 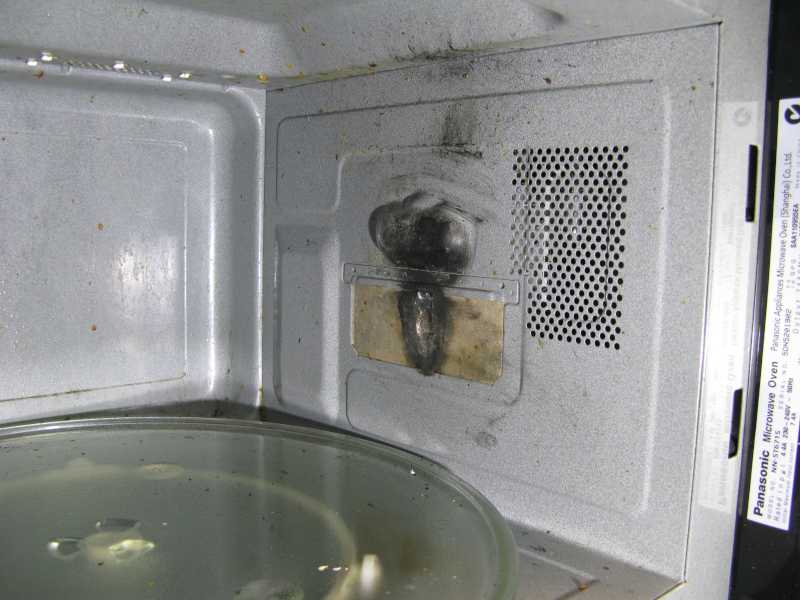 The waveguide cover of this microwave oven has burnt. It was easily and successfully repaired.

Repair
Microwave ovens can develop a range of faults some of which are able to be repaired for a fraction of the cost of a new one.

Recycling
At the end of its useful life a microwave oven is able to be recycled.  A high percentage of the materials such as ferrous metal, transformers, motors, circuit boards, and cabling can be recovered.

From an environmental viewpoint a microwave oven should be used as long as practicable to reduce e-waste and to reduce greenhouse gas emissions from the recycling and manufacturing processes.

Myths
There are a number of myths about microwave ovens circulating on the internet and some may actually pre-date the rise of the internet as a source of information and misinformation.

A widely circulated myth about microwave ovens is that the magnetron, the component which produces the microwave energy, contains beryllium. This is not the case for domestic ovens but may be applicable to magnetrons used for generating microwave energy for telecommunication use.  What is thought to be beryllium is actually aluminium oxide.  It is likely that any product containing beryllium will be marked as containing hazardous material.

This is a magnetron of a type found in domestic microwave ovens  The pink section, which supports the metal antenna, is made of an aluminium oxide rather than a beryllium compound as is often mistakenly stated.
Image: Wikimedia Commons.

Microwaves heat food and other substances by vibrating the molecules at a high frequency.  This is the same method as other forms heating so the effect is quite similar.

Since it is an electromagnetic wave rather than nuclear radiation the microwave energy will immediately stop once the source is turned off.  Microwave energy travels through air at almost the speed of light so there is effectively no delay in transmission of the energy to when it is received by the human body.  It should also be noted that electromagnetic energy radiation follows the inverse square law. This means that compared to being one centimetre from the oven a radiation level at one meter is 30 times less (rather than 10 time less) and at 10 metres it would be only one hundredth of the level.

Regulations
In New Zealand the sale and repair of microwave ovens is governed by the Microwave Ovens Regulations 1982. It stipulates mandatory warning signage on the oven as well as radiation leakage levels of new and repaired ovens.