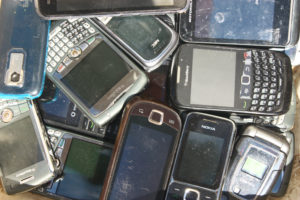 See our mobile phone page for our recycling service.

Mobile phones are widely used in New Zealand and with changes in technology, product failures or breakages, and a desire to upgrade means that there is a continual stream of phones that require recycling.

The Starship Children’s Hospital in conjunction with Swapkit operated a mobile phone recycling scheme for a number of years.  It was a fund-raising scheme resulting in over $2.3 million being donated to the hospital over a period of six years.

A number of other recycling schemes have operated in New Zealand including Vodafone’s “The Old, The Broke and The Ugly” service with $5 per phone donated to the Zero Waste New Zealand Trust.

The RE:MOBILE government accredited product stewardship scheme for mobile phone recycling began in 2014 and is operated by the New Zealand Telecommunications Forum.

Galaxy Upcycling: How Samsung Ruined Their Best Idea in Years | iFixit18 May 2021
Samsung had a revolutionary approach to reusing old Galaxy phones four years ago. We were an excited partner. What happened to Galaxy Upcycling?