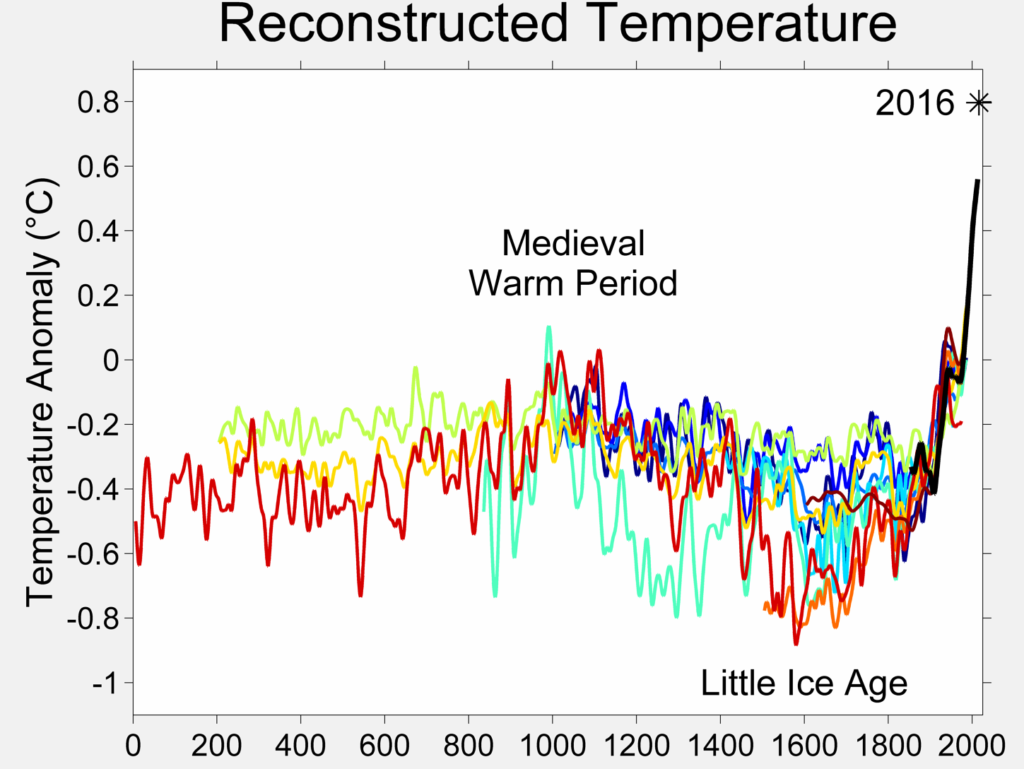 The global average temperature has risen sharply in the past century.

Climate change can be considered to be the most serious of all the human induced environmental impacts.  Although there are still some who deny the existence of anthropogenic climate change the potential effects are so devastating that we should all act as if it is real possibility.

Global warming is both a synonym for climate change and one of its effects.

The manufacturing, usage, and disposal of electrical, electronics, computer technology requires energy and this energy is often derived from fossil fuels.  Fossil fuels (oil, natural gas, and coal) produce carbon dioxide as well as other greenhouse gases and are the major cause of global warming

One effect of e-technology is the use of gases that contribute a huge amount to the greenhouse effect per unit volume.  Two of these gases are nitrogen trifluoride and sulfur hexafluoride. Nitrogen trifluoride  is 17,200 more potent than carbon dioxide, the main greenhouse gas emitted during human activity.

Ironically, flooding in Thailand in 2011 which was at least in part due to climate change, disrupted the supply chains for a number of major electronics manufacturers.

Mitigating the effects of using technology can be achieved with a number of methods including good product design, reducing the number of items we purchase, buying durable items, having items repaired, and recycling items at the end of their useful life.

Manufacturers can switch to sustainable energy sources and offset emissions with carbon sequestration methods.  Products can also be designed to be energy efficient.  This is already happening but there are further efficiencies that can easily be made.

Repairing computers and appliances is an easy way of reducing climate change.  There is embodied energy in the devices we purchase and so to reduce the climate change effect of this energy the device should be used as long as possible.  If it fails it should be repaired.

Recycling generally leads to a reduction in energy use compared to the mining of fresh resources.  A good example is aluminium, a metal often used in electronic devices.  Recycled aluminium uses 95% less energy than production of aluminium from bauxite.  A large percentage of e-waste is able to be recycled but in New Zealand the amount recycled is very low in comparison to similar countries.