To find out how to recycle your batteries see our battery recycling page. 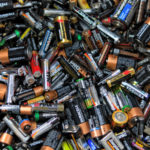 All batteries are able to be recycled and there are sound environmental, health and safety, human rights, and economic reasons to so.

Some batteries contain heavy metals which makes recycling an important method of preventing harmful substances from entering the environment.  Also, most of the materials in batteries is recoverable and therefore recycling them reduces the need to mine fresh ore.  Recycling is generally more energy efficient than the production of new material so there will be a small reduction in greenhouse gas emissions.

The three main heavy metal in batters are mercury, cadmium and lead.  In recent decades mercury has been phased out as a constituent of some batteries.  Cadmium is used with nickel as the NiCd batteries.  It is now less common with the advent of the better performing lithium batteries but can still be found in new products, especially emergency lighting units.   Lead is used in lead acid batteries for vehicles and in gel cells (also known as VRLA, SLA, or AGM batteries).

Some of the minerals used in batteries are mined by workers, including children, with disregard to human rights.  Recycling batteries means that there will be less reliance on minerals mined under such conditions.

Note that the terms battery and cell are often used interchangeably although technically a battery consists of two or more cells.

At present there is no mandatory requirement for consumers to recycle batteries in New Zealand.   Some councils, notably Auckland Council and the Christchurch City Council, suggest disposal to landfill. Car batteries are commonly recycled since a small fee is often paid out, but very little recycling happens for other types of batteries.

Battery recycling policies and systems are well established in some other countries.  The European Union has a Battery Directive which the member states must abide by to avoid legal action by the European Commission. North America has the Call2Recycle public service programme for battery recycling (as well as mobile phones).  The Australian Battery Recycling Initiative was set up in 2008 and are involved in establishing a national stewardship program for handheld batteries.

In July 2020 batteries became a priority product under the Waste Minimisation Act.  This means that they will have a requirement to be recycled.

Batteries are generally very safe but there are some precautions that should be taken when storing for recycling.  Batteries, especially coin or button cells, should be kept out of reach of children since can be swallowed, leading to possibly serious health issues.