An Ozito OZCD12V1A cordless drill came in to us for recycling and it looked like it had hardly been used.  Rather than recycling it I thought it might be a good candidate for repurposing or rehashing with different batteries. 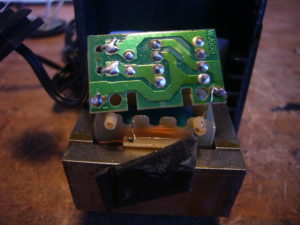 The drill was hardly used, possibly because that batteries could not get charged?

I don’t know how the mechanical side stacks up but the electronics is pared back to an absolute minimum.  Firstly, there is no filter capacitor in the charger power supply.  You can get away without one in some cases but it is usually good practice to have it.  The NiCd charging circuit is really basic.  Maybe even too basic to the extent that it may damage the NiCd cells.  It consists of six components, and two of those are indicator LED’s.  Having the two LED’s (one red and one green) is one positive thing.  Sometimes cheap products only use one.  Temperature sensing of the NiCd cells is also non-existent and that, coupled with the lack of battery voltage detection, means that the really basic charging regime will shorten the lifetime of the cells.

It is a real shame that consumers demand cheap products and manufacturers supply them.  It is creating unnecessary environmental problems

Alan Liefting is the founder, a shareholder, and the Managing Director of Ecotech Services. The views expressed here are his own and do not necessarily represent those of Ecotech Services Ltd.
View all posts by Alan Liefting →
This entry was posted in Uncategorized and tagged e-waste, electronics, quality, recycling. Bookmark the permalink.