Posted on September 5, 2015 by Alan Liefting

Here is a story for all you electronics techs.  And anyone making assumptions.  Most of us in other words.

This is about a caddy type welder that came in for repair, a 180 amp inverter model. Can’t remember the make or model.   I checked for weld voltage and there was a healthy 80 odd volts coming out but there was a really pathetic spark from the electrode which meant there was next to no current.

So I took it apart to do some fault tracing. Using a light bulb as a load I was getting 20 volts out on the weld terminals, down from the no load voltage of 80 volts.  Ok,  so is there a lot of resistance in the output, or maybe the inverter control circuit is doing something funny. Like a lot of these small caddy welders they have a centre tapped transformer and a full wave bridge rectifier arrangement.

Even with the load in place I measured 80 volts AC on both sides of the transformer secondary.  All the connections were tight with no sign of heating due to contact resistance.  So was it a dodgy diode pack? It was a SOT227 package, which looks like the one pictured here. 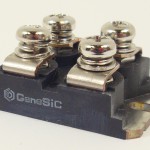 I could measure the diode voltage drop in circuit of about 0.3 volts, which is what is expected for these Schottky diodes. Now normally semiconductors go short or blow apart and sometimes go leaky but if this diode pack is faulty it is as if it acting like a one way resistor!  Odd.

Getting the diode pack off the heatsink was no mean feat with a mains filter capacitor, output current sense resistor, and output current bus bars all in the way.  With it out on the bench both diodes measured ok. We didn’t have one in stock and Tony suggested doing a DC check on it.  Putting about 30 volts up the anode and a 100 ohm resistor strung off the cathode I got nothing coming out of it!  I then remeasured the junction and it was now open circuit!  Definitely a dodgy diode (diodes actually).  When I remeasuring the junction voltage a bit later it measured ok.  Probably heat sensitive.

So the moral of the story is that we cannot make any assumptions about how components fail.  Testing at all stages worked in this case in getting to the bottom of the fault pretty quickly.  When fault tracing I am sure we are all guilty of sometimes making assumptions and taking longer than it should to fix something.