I replaced yet another compact fluorescent lamp (CFL) in our house last night.  I have been meaning to track our personal MTBF of these things because they seem to fail all too easily – well before the service life of at least 6,000 hours.  I actually ended up putting in some standard incandescent bulbs in as replacements although they seem to fail prematurely as well.  This time I have kept the receipt to monitor the lifetime of the new bulbs.

I took the failed lamp to the workshop to investigate the failure mode, along with my small collection of other CFLs that had failed. 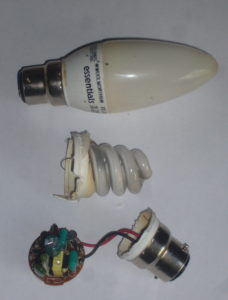 A Woolworths Essentials CFL along with a complete one.

First up is the Woolworths Essentials CFL.  I think I tried to complain to Woolworths about these things but I never heard back.  I don’t think there is any data on their lifetime available from Woolworths.  After taking the lamp base apart I discovered that one of the lamp filaments was open circuit.  There was also quite noticeable deposition on the inside of the tube. This deposition is probably tungsten that had boiled off the filament.  There are two capacitors on the circuit board that are probably polyester greencaps which are now quite a dark colour indicating that they had built up a lot of heat. 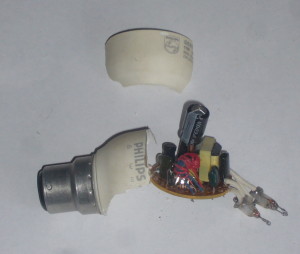 A dismantled Philips Genie CFL. The venting of the capacitor is not very obvious at this angle.

The next one I inspected was a Philips Genie 11 watt model.  I gave it an initial test to see if it was actually blown (it was in my to-do pile for some time). The CFL tube gave a brief flash at switch on in the same way that some incandescent do when they blow.  After taking this one apart I found that the the mains filter capacitor (4.7μF at 400V) had almost vented.  Capacitor failures due to venting (caused by a build up of internal pressure during overheating due to the ESR) are a common fault in switched mode power supplies.  These power supplies operate at frequencies in the order of 20 kHz so if they have poor quality capacitors the heating due to ESR is significant (Ohms Law, ripple current, heat dissipation and all that). Heating due to ESR is much less at a 100 Hz ripple frequency so the failed capacitor must have had a really high ESR value.  The capacitor is one of the cheap brands that come out of China so it’s failure is no surprise.  As for the failure mode I can only guess that the capacitor ESR slowly increased, the lamp may have somehow shut down due to over temperature, and then when I turned it on from cold the high ripple voltage caused the switching transistors to fail by both being in conduction at the same time.  Someone has reverse engineered the electronics of some CFLs and you can check out the circuits on this page. 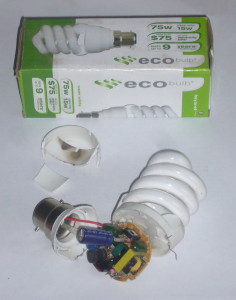 The last one I looked at was from Ecobulb, a New Zealand company, although the lamps themselves are manufactured overseas of course.  Given the lack of debris and signs of heat discoloration his one did not look like it had had much use.  The switching transistors had shorted and an RFI coil was open circuit.  The coil essentially acted as a fuse.  My guess is that this one failed because it was used on a dimmer circuit.  Hmmm, that gets me thinking about the design of the electronics in these CFLs.  There is no reason why the designers could not have put in a low voltage cutout in the circuit.  Oh, silly me that would cost extra and affect the profits!

Eventually I hope to wire the whole house for 12 volt lighting and then use 12 volt LEDs in all of the lamp fittings.  This is a much more elegant, versatile,  and efficient way of lighting.  Single step down transformer (switched mode of course), ease of battery backup, ability to hook into PV panels would be a few of the advantages   I’ll keep you posted.