This cable came in as part of a whole bunch of other stuff from an IT company. 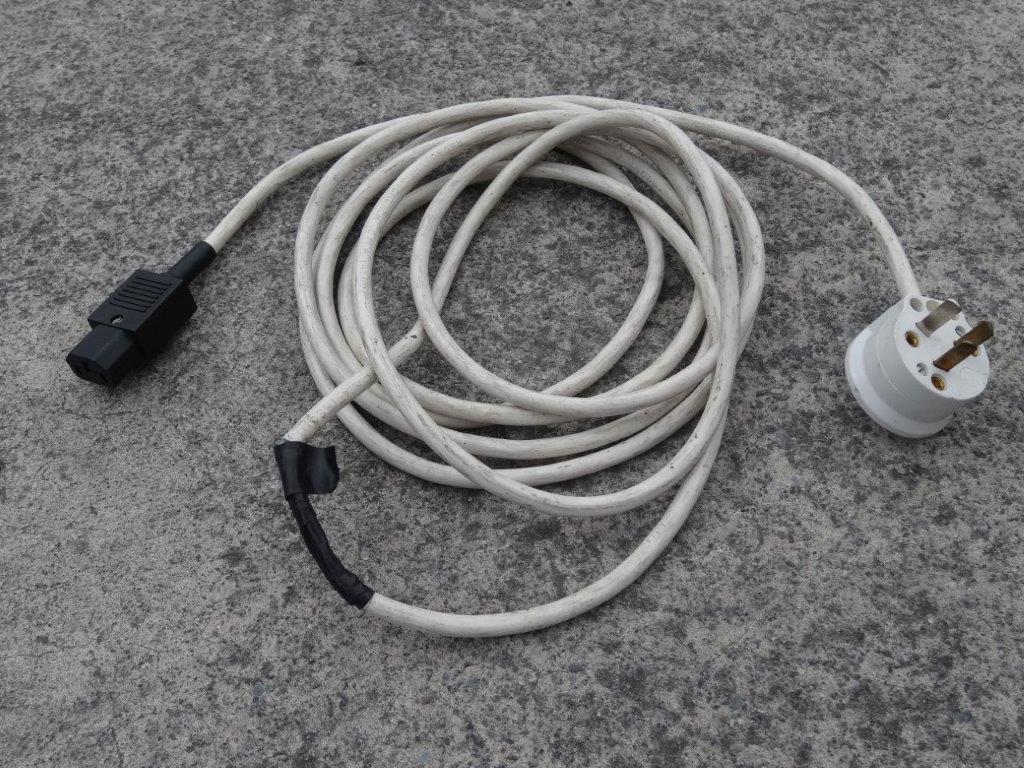 Not sure why someone would want to make one of these.  A mains plug to IEC connector cable is pretty easy to get hold of.  We get them as new and used by the millions – well lots anyway.

The taped up joint is a bit dodgy!  The Electricity (Safety) Regulations 2010 says that cables are unsafe if they “are inadequately protected against the risk of damage by the nature of their covering or their method of installation”.  The AS/NZS 3760 In-service safety inspection and testing of electrical equipment standard says that tape should not be used, and I would agree on that point.

The wires were soldered and heatshrinked under the tape so it is not as bad as some of the others that I have seen.

As a means of promoting the repair industry Ecotech Services is offering free repairs or evaluation to a wide range of faulty electrical, electronic and computer equipment on the 2020 International Repair Day.

The event will be held at our premises on Saturday the 17th of October between 8:30am and 5:00pm at 139A Wordsworth St in Sydenham, Christchurch.

Effective immediately we are increasing our labour charge out rates since we can no longer absorb the increased costs of the numerous changes and challenges with which we are faced.  Our labour prices had not changed at all since the formation of Ecotech Services in the early 2000s.

Even with the increase our prices are still comparatively low.

These new labour rates make it easier for us to continue with offering our services that reduce the impact of technology on the environment.

Had a no name brand battery charger come in for recycling.  I set it up on the bench to test it.  It powered up but after a bit it turned off.  I took the thing apart.  Pretty easy to do.  Four screws at each end holding the slit extrusion case together and one holding a couple of TO220 packaged devices in place.  The earthing was far from ideal.  It was just tucked under a self tapping screw and none of the paint had been removed.

So of course the thing will not play up with the covers off!  I set it up with a battery to check the charging.  That all looked good.

(I’d better not mention here that I put the battery on with reverse polarity and blew the output fuse.  Hey, I blame the fact that I did not have a black jumper lead.  Yeah right!)

I moved it a bit to look at the front panel and there was a spark and it stopped working!  “Oh s**t!”  I thought to myself “what have I shorted out?”.  Powered it up again and it still did not work.  Better do some fault tracing.  And then it sparked again.  Ha!  It is sparking in the Faston style connector. I was lucky that it had one of the clear insulating boots over it so I could easily see the sparking. 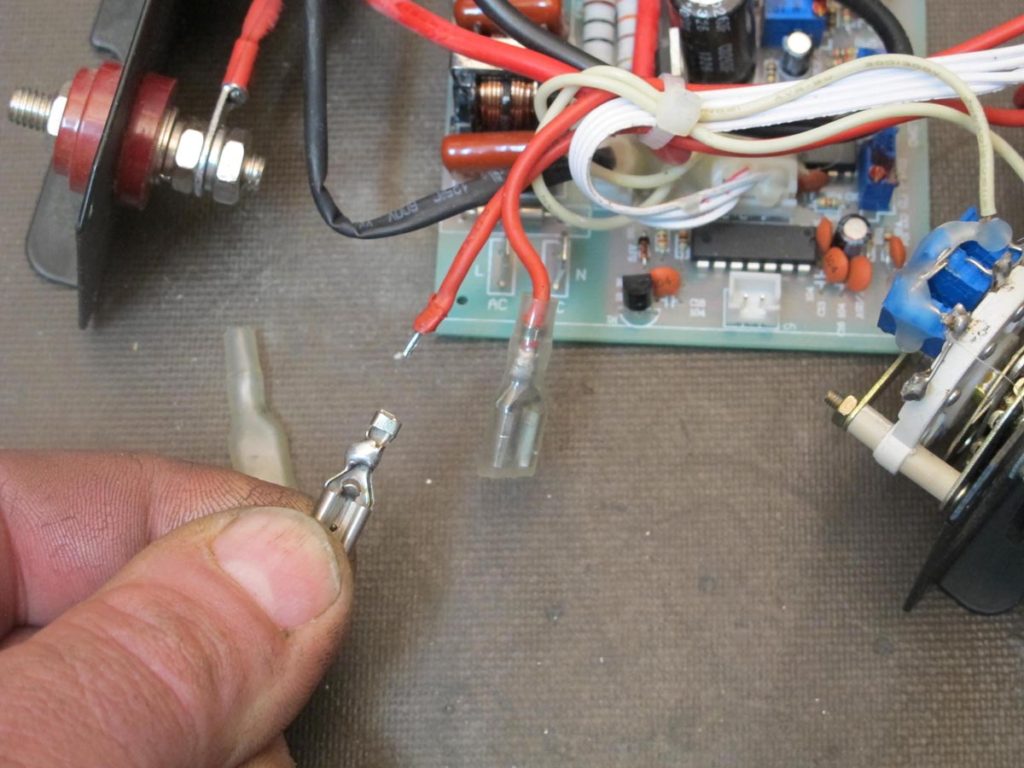 The connector had been crimped but the wire gauge was too small for the connector so they just soldered them.  In this case there is a big solder blob that got nowhere near the wire.  So it was a very loose connection.

Not only did they cut corners with thin wires but they also threw these things together really quickly.   The solder hardly melted before they moved on to the next one.  And there was probably no quality control or burn in testing.

I did a decent job of soldering it and then added some proper earthing. 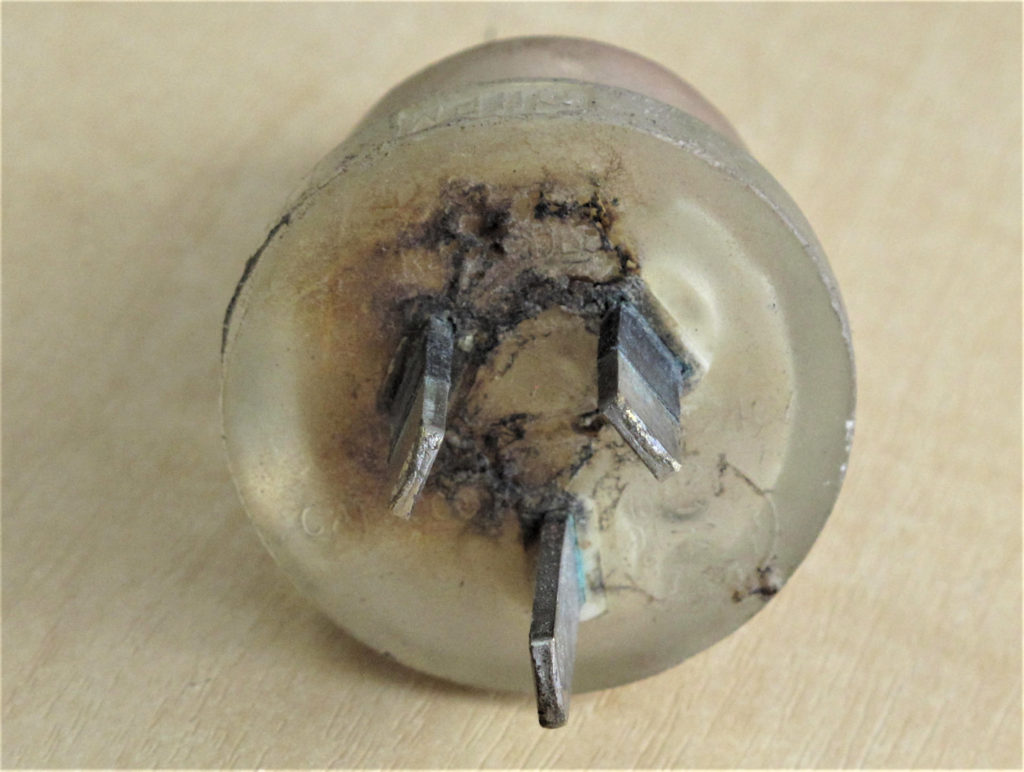 This is one of the reasons why this type of mains plug should not be used in wet areas. It had arced between phase, neutral, and earth when wet, which carbonised the plastic of the plug.

The other reason is for electrical safety.

An extension cable can traverse wet areas but the plugs and sockets should not get wet, unless they are rated for wet areas.

This solar controller came in for recycling. 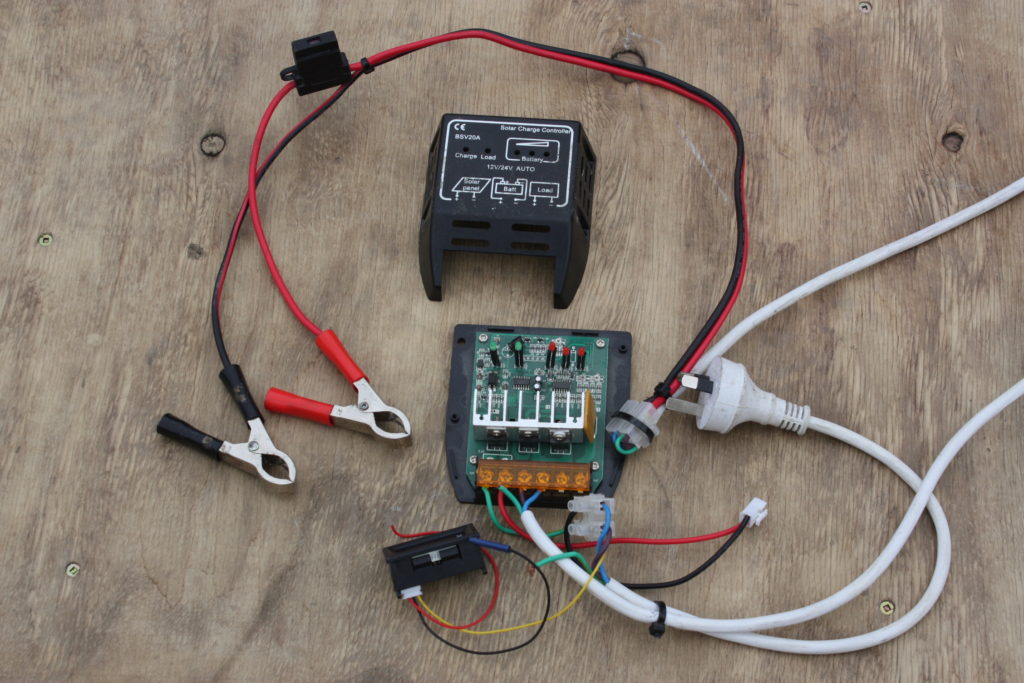 Notice the New Zealand mains plug used as part of the wiring.  This is potentially dangerous.  There is a possibility that it could be plugged into 230V AC mains power.  At best it would just blow up the controller and at worst it could electrocute someone.  These solar controllers only work up to about 20V.

This reminds me of the time I was repairing TVs back in the early 1980s.  Someone came in with a Pye Vidmatic portable colour TV (they were made by Sharp) that could run on 230V AC and 12V DC.  It had a mains plug on the 12V input.  The customer said he wired up 12V DC on his boat using mains plugs and sockets!  He said the TV would no longer work on 12V.  Funnily enough the 12V DC input fuse was blown!  It must have had 230V AC fed into the 12V DC input.

The lesson here is that the appropriate connectors should be used.  Mains plugs and sockets should only be used for mains voltages.

Posted on 7 December 2019 by Alan Liefting

When I see typos on something that has been produced by the thousands I wonder about the quality of the item.

We came across this BTC keyboard box that has two really serious typos. 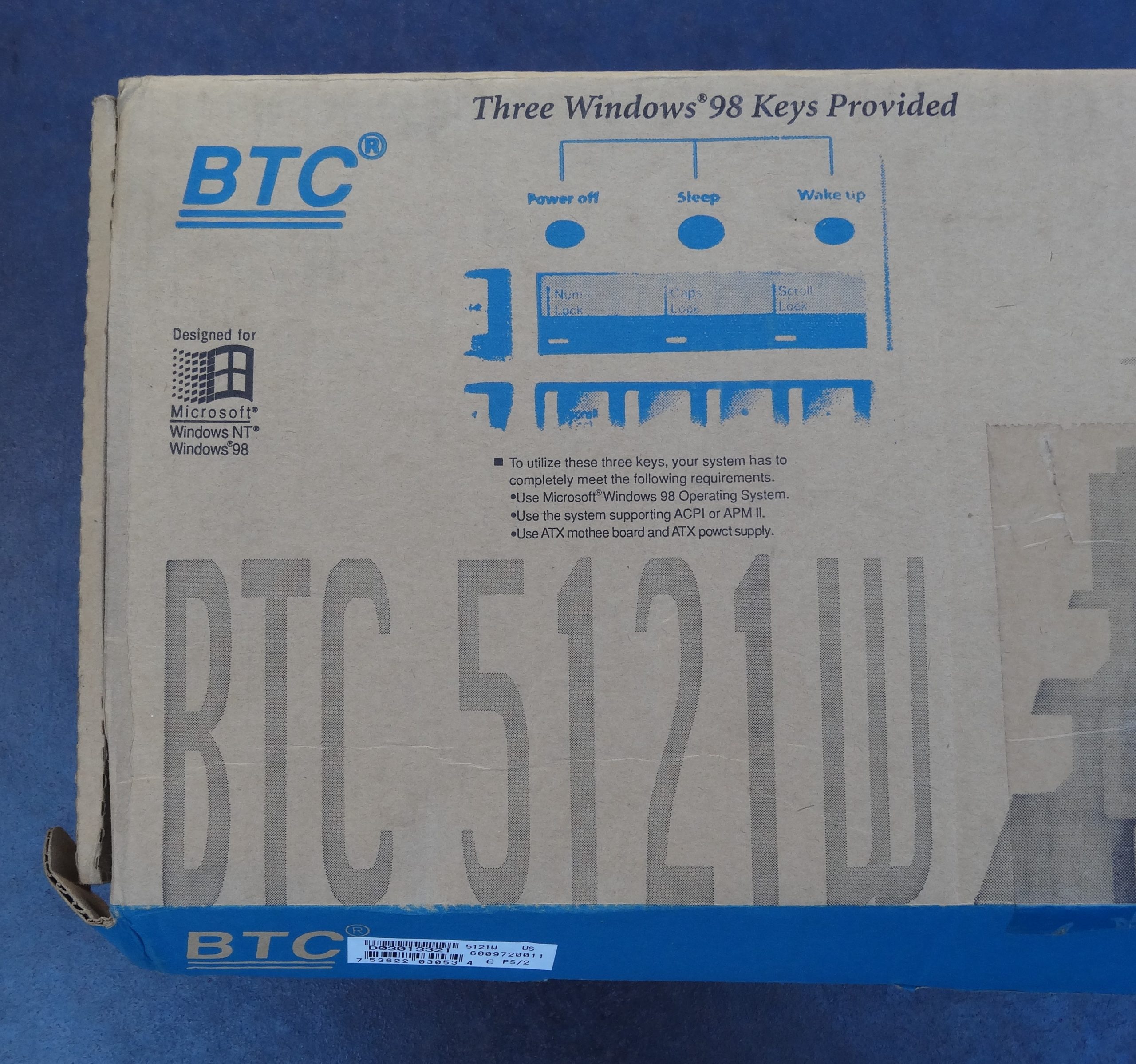 How can you manage to make those typos?  And how can you miss them on proof reads?

Good on you Dell

Posted on 19 September 2019 by Alan Liefting

We get a lot of brand new monitor stands in for recycling.  It seems that companies buy monitors and stick them straight on to monitor arms.  I was thinking that the manufacturers should sell the monitors without stands.  This would reduce prices and stop wastage.

Well it turns out that Dell actually supply at least one model without a stand.

Good on you Dell! 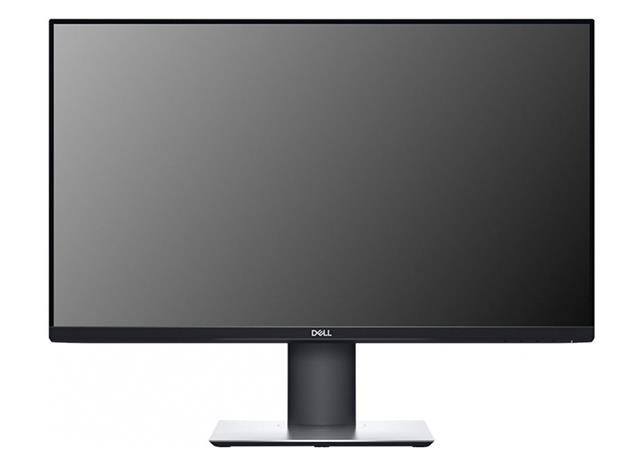 If you need a stand for a monitor we keep a lot of the ones that come in for recycling.

I came across this real dodgy modification. 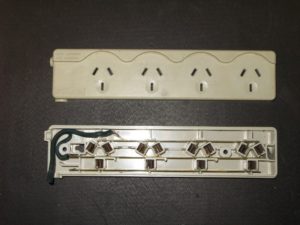 This plug board came in for recycling. The original cord has been replaced with one that has no earth. Also, the replacement cable is the older two core type without an outer sheath.

This is really unsafe.  There is no earthing on the sockets.  If something that wasn’t double insulated was plugged in that had leakage from phase to the metal you can get a belt off it and possibly get electrocuted.

The lesson here is: Don’t modify something unless you know what you are doing.

What is this ATX power supply rating? 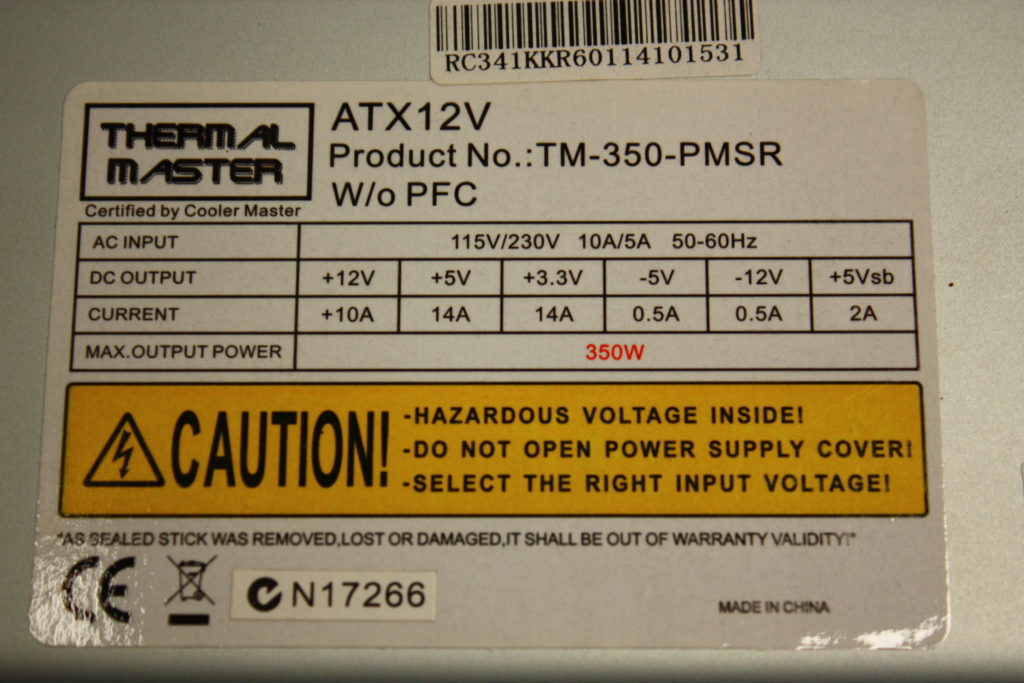 350 watts? Yeah right! The mangled English grammar does nothing to instill confidence as well.

Maximum output power is given as 350W but if we add up all of the individual output power ratings we get this:

Is it a mistake? Is it false advertising?

Turns out that there is a post on the forum at badcaps.net about these power supplies and it is only a 250W power supply.