A Philips 42TA2800 LCD TV came in for recycling.
“It works” the customer said, “It is just the power switch.”
The actual plastic power switch actuator was missing and you could see that the power switch circuit board was just dangling off the cables.  It looks like they were poking the pcb mounted power switch (two in series) to get it to turn on.  I don’t think they had the remote control for it.

After taking it apart I discovered this: 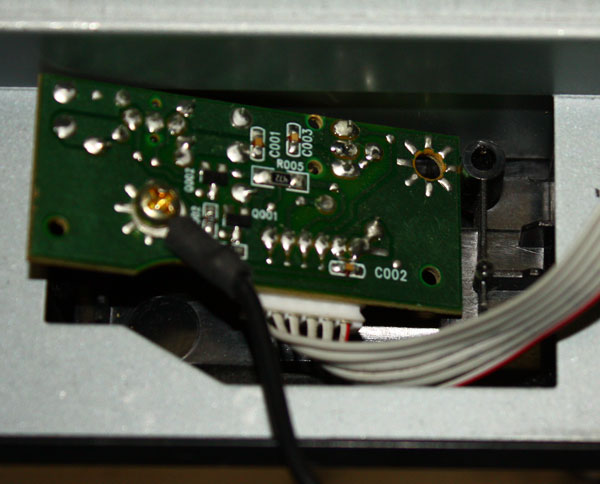 The power switch circuit board is positioned to try and show the lack of a second screw ever having been present in the plastic support.

There was ever only one screw holding the power switch circuit board in place.  The other was never fitted!  So the plastic support broke.  Not surprisingly. This is a power switch.  Something that is often abused.  And in this case it had to do a lot of work because of the lack of a remote.

So what happened here Philips?  Are these TVs not made in highly automated factories with all sorts of quality checking including the use of image recognition?  So did this one slip past the inspections?   Or is this inbuilt obsolescence?  Or are you saving one screw and one extra assembly operation to save a fraction of a cent?

Get back to me on it please Philips.  Thanks.

Anyway, talking about customers and switches and faults brought back some memories. When the customer said “It is just the switch” I was reminded of my days repairing the old school CRT monitors and the even earlier days of repairing CRT TVs.  Customers would sometimes give their diagnosis as “It is just the switch” or “One of the guns has gone”.  It got the stage where I thought customers think that a CRT TV or monitor only consists of a CRT and a switch!  They don’t know that there are power supplies, HV stages, signal processing circuits all containing resistors, capacitors, semiconductors, wires, cables, connections etc and all of which can fail.

Alan Liefting is the founder, a shareholder, and the Managing Director of Ecotech Services. The views expressed here are his own and do not necessarily represent those of Ecotech Services Ltd.
View all posts by Alan Liefting →
This entry was posted in Uncategorized and tagged electronics, quality, repair, screws. Bookmark the permalink.